Blog
Inspiring athletes of the ‘Next Generation’
Hammer Discus Cages / Blog / Many will want you, but few will invest by Benn Harradine 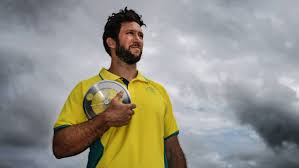 Many will want you, but few will invest by Benn Harradine

The commercial world of sport is growing exponentially. For the greater good or the greater bad? Of course a debate of opinion. It is, however, a common misconception that athletes are making tens of thousands of dollars, euros or pounds from their craft but in actual fact, the numbers are far far less.

There is such a small percentage of athletes who can live off their name. Even then, that is determined greatly by their success. Their looks, or being in the right place at the right time.

The Rio Olympic Games in 2016 saw TV companies paying more than $4 billion to screen the 19-day festival of sport, while the eleven global sponsors bankrolling the event have a combined market value of over $1.5 trillion. A recent study showed that just 6 percent of the money generated by the Olympics goes back to athletes as salaries. The rest is spent by the IOC and national bodies as they see fit.

In contrast, Premier League players pocket well over half of their club’s revenues.

Now with such things as the Rule 40, it is becoming even more difficult to appropriately market oneself during the biggest sporting event in the world. For those are not familiar with this rule it is defined as:

Rule 40 is a by-law in the official Olympic Charter, and it states that “No competitor, coach, trainer or official who participates in the Olympic Games may allow his person, name, picture or sports performances to be used for advertising purposes during the Olympic Games” without the express consent of the IOC board

So what are we worth? Let’s take a look at a typical scenario for an Australian Athlete competing in Track and Field:

Say you are an Olympic athlete. You compete in the games and finish in the top 10. As far as support from the national sporting body, you may get between $8000-$12000 annually.

Maybe you have a small time sponsorship with an apparel company, IF you are lucky that might be to the tune of $5000.

You now have an Olympic Athlete, training full time, with a total annual income of, in this case, $17,000 Australian Dollars.

The exponentially growing world of social media gives athletes a chance to bring genuine followers into their journeys and behind the scenes of their training. Of course, most companies have a social media presence and some more than others. The question is, are we selling ourselves short? What does it cost us when we simply, “plug a product in a post for some free things”

Let’s say an athlete gets a pair of socks to post on Instagram to their 20,000 Followers. Maybe they get 10 pairs “for free” but attached to that is a, “we want at least one post per pair of socks” The socks are produced for, $1 AUD and they have a retail value of $20. Away they go and post pictures, tag, and hashtag the company. 20,000 followers spammed for a total investment of $200 worth of product. Seems fair, doesn’t it?

So the process of a “DM” (Direct Message) from a company saying, “we want to send you some product if you post a few pics for us” and you thinking, “oh how cool, I get free stuff!” Should definitely include the question, “what is this worth to me?”

{Side Note-Make no mistake, everything has perspective, for example, if a company gives you a car worth $30k, of course, it makes sense to represent them appropriately.}

The following is a sample performance bonus from a company who’s annual revenue in 2015 was$5.4 million AUD. Based on the number of people who sign these contracts, it is clear how they are able to do so.

As a contrast to this, below is a list of Ryan Lochte’s endorsement packages for 2012 Olympics:

Something is not better than nothing:

Marketing and sponsorships are based on relationships. They are mutually beneficial. The company gets to share in the growth and success of an athlete, taking care of them financially and supporting them through their highs and lows. Helping them develop their own brand and following. In return, the athlete can then feel like they are valuable. That they can contribute by helping the company to market a great product with their name and likeness, sharing ideas and some of the traits that few people acquire so young from the world of elite sport.

I came across an athlete who was continually turned down by a particular company, saying that they were “not valuable enough to support”. The usual rigmarole of, “we have allocated our financial support for this year but are happy to provide you with a product” Then that athlete exploded and with that exposure, the same sponsor came back with an offer of a very lucrative financial contract. To which the athlete kindly declined making example of the fact that they did not want to represent a brand that had no interest in supporting athletes to become better.

It pays very well to use your brain. Do some research. Seek representation by people who understand the business of sport. Who have contacts with the “big hitters” and understand the true value of a walking talking advertisement. This will hopefully help to decrease the gap between your support from the national sporting body if any, and what you have to invest out of your own pocket. Maybe you might be able to invest in your life after sport!? The easier it is to live, the easier it is to train smart, the easier it is to be a better version of yourself.

Today when you surf the social media superhighway, and you see athletes promoting companies that may or may not value them in any way other than cheap way to saturate a market ask yourself, “Is it worth devaluing myself and be perceived as someone who is sought after, or work more on ways to grow my following and my value that might benefit me later” After all, if I’m Marketing Director Sam Smith from Worldwide brand, and I see a picture of you promoting another company, am I going to bother offering you a contract or am I going to go and find someone else I like?